The Curious Case of SD Eibar

The final whistle blew on the 2014/2015 La Liga season, and there were despondent scenes in the Basque region. SD Eibar had thought they had pulled off a remarkable achievement by reaching safety with an emphatic 3-0 victory over already relegated Cordoba during the final game of the season.

However, news soon filtered through that Deportivo La Coruna had completed an incredible comeback from 2-0 down to draw 2-2 at Camp Nou against newly crowned La Liga champions Barcelona. That result, coupled with an inferior head to head with Granada meant that Eibar’s first ever season in La Liga ended, as expected, with relegation.

The disappointment was clear on the faces of the fans, but soon after the final whistle the players received rapturous applause for their efforts. After all, nothing else was expected from a team which plays in front of a capacity crowd of only 6,267 at the Ipurua Municipal Stadium, the smallest stadium by some distance in all of Europe’s top leagues. In fact, the Ipurua is so small that it is a regular occurrence to see residents of apartment buildings next to the stadium overlooking games from their balconies.  Make no mistake; this is as far away as it gets from the glamorous surroundings of the Bernabeu and Camp Nou. Hands on heads as Eibar suffer relegation….or do they?

Fast forward to the current La Liga table and an extremely strange sight can be noticed. Eibar are in the extremely respectable position of 7th place in the table. Wait a moment….. 7th in  La Liga? But shouldn’t Eibar be competing in the Segunda Division after being relegated? In order to find out what had happened, we need to go back to the summer before the current season started.

An announcement was made by the Spanish FA that Elche CF, one of Eibar’s relegation rivals in the previous season, had defaulted on unpaid debts it owed to the Spanish tax authorities. The consequence of this meant an automatic relegation for Elche to the Segunda Division. Unbelievably, Eibar would take Elche’s place as the 18th placed team in the previous season. Eibar were back in the big time in the most incredible circumstances. And this time around, they were intent on learning from their mistakes.

During the previous season, Eibar had actually begun the season in exceptional form. Up until the halfway stage of the season, they were the highest performing Basque team in La Liga. They were outperforming both Athletic Bilbao and Real Sociedad, and were actually unbeaten against their more illustrious rivals in the league. But then reality kicked in and things started taking a turn for the worse. Injuries coupled with a run of bad form saw them pick up just 8 points in the entire second half of the season.

This season, it has been different. Not only are they above their more renowned Basque rivals again, but they are currently on 36 points, which is already higher than their entire tally from their previous season and there are still 13 matches left to go in the league. It is safe to say that safety has all but been secured. They have been far more consistent and have managed to maintain their good form throughout the season.  This is due in large part to some shrewd business during the summer despite operating on the lowest budget out of all La Liga teams. The pick of the bunch was the loan signing of striker Borja Baston from Atletico Madrid. The 23 year old has been a revelation this season and he already has 16 goals in the league, which makes him the highest scoring Spanish player in the division.  Astonishingly, that is also one more than Lionel Messi’s tally during the La Liga season until now. Granted Messi missed a few months through injury and will certainly be way ahead of Borja by the end of the season, that is still some achievement. He deserves great credit for his form this season particularly when you consider the fact that he had suffered heartbreak with a serious knee injury on his La Liga debut back in 2010.

Others have contributed greatly as well. Japanese midfielder Takeshi Inui was signed for just under half a million pounds from German side Eintrecht Frankfurt, and has provided creativity and dribbling ability from midfield. Striker Sergi Enrich, signed on a free transfer, has proved an able partner for Borja and has chipped in with six league goals himself, with those goals earning Eibar an important five points. Defensively they have added experience figures in the team including former Wigan centre back Ivan Ramis. During the January transfer window, Brentford winger Jota was brought in on loan for the rest of the season to help add some extra guile and creativity.

The tiny Estadio Municipal De Ipurua, where the best seat in the house is actually from the balconies of the nearby apartment buildings

Then there is coach Jose Luis Mendilibar, who was entrusted with leading the team in the place of previous coach Gaizka Garitano who chose to resign even after Eibar were reinstated into La Liga, citing rather surprisingly and admirably that “A coach that gets relegated does not have the right to continue”. Mendilibar actually coached Eibar before and very nearly achieved promotion with them in 2005. However, it is fair to say he has had an up-and-down managerial career up until now. The highlight was leading Valladolid to promotion in 2007 and maintaining their top flight status for the next two seasons. Since then, he has been sacked by both Osasuna and Levante after less than average results with both teams. However, he has done a fine a job with this Eibar team so far. Usually deploying a rigid and hard working 4-4-2 with Enrich and Borja leading the lineup, it has worked a treat so far.

The high points of the season so far has been beating rivals Athletic 2-0 at the Ipurua , a 4-0 hammering of Real Betis away from home and an emphatic 5-1 win over Granada. The latter two results can be seen as a representation of their impressive season; Betis and Granada were supposed to be their relegation rivals but were dismantled with consummate ease. 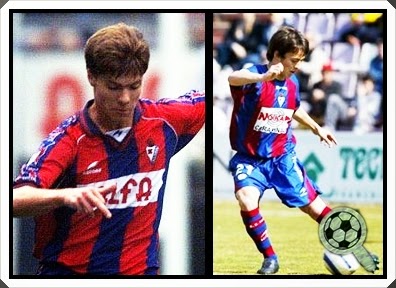 Once upon a time, two midfield magicians used to ply their trade for SD Eibar

Eibar have always maintained a reputation of being an honest club that make do with the little resources they have. Few people know this, but both David Silva and Xabi Alonso started out their careers with loan spells at Eibar, gaining valuable experience on the road to extremely successful careers. Apart from those two however, it has proven to be extremely difficult to attract any sort of top talent due to a mixture of both unfortunate geography and weak financial power. All of the local talented Basque players are attracted by both Real Sociedad and Athletic Bilbao, and this leaves Eibar with less gifted players at their disposal. Is it possible then that this sudden and surprising twist of events might just mean they have found the stroke of luck needed to grow their club and compete with the traditional Basque powerhouses?

When you consider the fact that starting next season La Liga teams will gain significantly increased finances thanks to a much more collective and lucrative TV rights deal, then it isn’t a farfetched statement to say that the future looks bright for SD Eibar.

The Agrarian Theme: English football and its farmers complex

Jota: The Return of the King

Badge of the Week: Real Sociedad